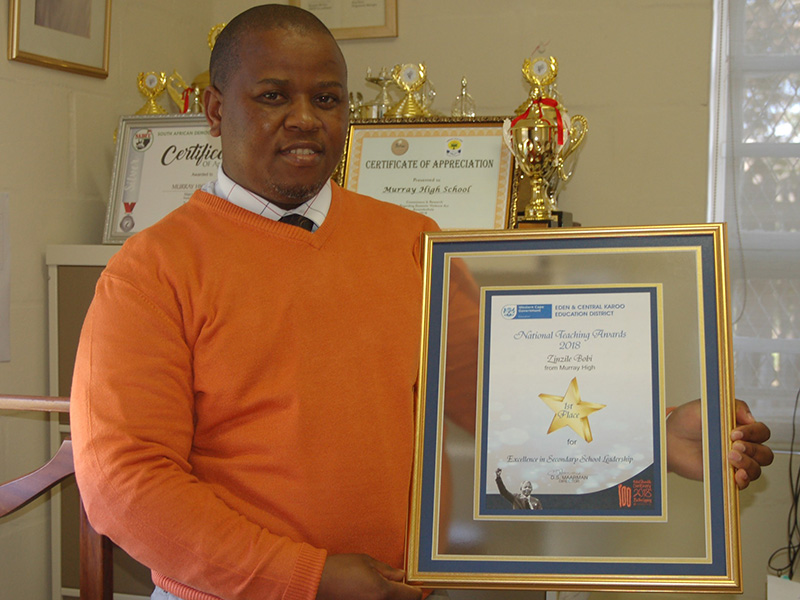 Mr Zinzile Bobi, Principal of Murray High school and a Bitou10 Foundation Board Director, is a man of exceptional values and passion.

Hailing from the Eastern Cape, Bobi has been teaching for 22 years – in 1996 he taught secondary school Mathematics, Physical Science and typing. Later in 1998, seeking more experience, he relocated to Cape Town and in 2003 was appointed head of Mathematics and Science.

In 2006, he was promoted to Deputy Principal and by 2008 became the principal of a Mathematics and Science school, Denaladi. The school consisted of 3 campuses, with 1 700 learners and 51 teachers, which kept him constantly busy.

In 2015, after taking a short break, he climbed the ladder further and was appointed principal of Murray High School in Kwanokhutula on 1st April 2017.

“I have inherited a great team who are willing to work and eager to learn and I am very proud to be a part of this team.” says Bobi.

Being a new principal meant the implementation of many changes in one way or another. Bobi immediately accessed the systems and structures that were in place and revised the curriculum and year plan, to ensure that every person in the school knew exactly what was required in terms of management, staff and committees.

His best achievement yet, was initiating a Matric Camp, where all Murray High matriculates camped in the school hall for the entire duration of their matric finals. Teachers tutored students from 3pm till 11pm in the evening and all the students were fed through the efforts of public donations.

A great number of these children come from environments that are poverty stricken, riddled with narcotic abuse and dysfunctional families. Students find it difficult to focus on their studies, especially if they go to bed hungry.

Bobi feels that a safe environment benefits his students during this very crucial time. The procedure also ensures that the students who have fallen under negative influences, are present and coherent during their exams. The results have spoken for themselves and he was extremely pleased when Murray High achieved the best results ever, with an 83.5% pass rate, in 2017.

Bobi is as well, proud of his role as a Board Director for the Bitou10 Foundation. He believes the foundation greatly impacts and plays a vital role in the developing of children during the foundation period, enabling them to cope with the schooling systems in place.

He works cohesively with the surrounding Bitou schools – particularly Kwanokuthula Primary School, headed by Mr Faleni, where they focus on the Grade 7 classes, in preparation for high school. The students write a diagnostic test so that the Gr 8 and 9 teachers can access focus areas.

Bobi was nominated by his Circuit Manager, Miss Suzette de Villiers to run for the National Teachers Award for the category, ‘Excellence in the Secondary School Leadership’ for the Garden Route and Eden District. He achieved second place and is now up for a national nomination.

To support Zinzile Bobi’s ‘Matric Camp’ initiative contact Sooneela via email, manager@bitou10foundation.co.za or call 0445336466. Food donations or groceries and volunteers to cater will be most welcome.